I was offered a £50 voucher in return for a review for Frankie and Bennys a while back, we chose to use the voucher this evening and took Phil's boys with us, we wanted to take them out as a mini celebration of telling them about the baby.

When we arrived we were seated at a tiny table near the kitchen doors, which with all the menus and other paraphernalia on the table was far too small, so I asked to be moved.  Luckily the next table they showed us to was a booth and much more roomy, we'd placed our drinks order before we moved.

We opted to do a main and a dessert each.

The boys chose the Calamari Caesar Hot Baked Wrap with fries and Carbonara, Phil chose a chicken burger and I went for the lighter pizza option.  At this point our drinks hadn't arrived and we had to order them again - I assume the table change caused confusion.

There was further confusion when the food came out and the Calamari Salad came instead of the wrap.  We queried this and a lady, who I'm assuming was a floor manager, came over and told us there wasn't a Calamari Caesar wrap on the menu - she was holding the menu at the time.  I was rather embarrassed that we appeared to have made a mistake and both Phil's eldest and I had misread the menu.  She did offer to put the calamari in a wrap but after we'd waited 40 minutes for food Phil's eldest was very hungry and just wanted to eat.

Imagine my surprise when upon checking the Frankie and Benny's website it clearly shows the wrap.

Our flour tortilla loaded with our seasoned calamari, Cos lettuce and Grana Padano, smothered in Caesar dressing. Served with a pot of coleslaw and your choice of house fries, salad or a jacket potato.

I'm kicking myself for not demanding to have another look at the menu to show her what we'd seen, I just accepted what she told us and then paid for the salad and the side when the bill came.

The rest of the mains were OK, nothing outstanding, but I was expecting that.  The calamari was eaten happily and the salad left, teenage boys not being salad lovers, luckily my pizza was much bigger than I was expecting so that was passed over and devoured.

I wasn't expecting amazing food, but I did expect the staff to know the menu and not to be over charged.

I also asked for another drink when the food arrived, after 15 minutes I was still waiting for it, our waiter did notice after the 15 minutes and brought me one straight over - but by that time I'd finished my main.  Irritating, but not a disaster.  We also didn't get charged for that - but I'm assuming that was an error, and not to compensate for another wait.

We all opted for a dessert, these came out without a hitch, two sundaes, a tiramisu and a vanilla cheesecake.  We were amused that our waiter thought the sundaes were for the boys, when they were actually for Phil and I, and had a chuckle when he handed over Phil's youngest's cheesecake telling him it was Chicken Tikka Massala. Other than mishearing the Calamari order, and it was very loud in there tonight, I can't fault the service by our waiter, he was friendly, polite and cheerful throughout, despite the frantic evening.

We all really enjoyed the desserts, I'd been looking forward to a sundae all day and wasn't disappointed.

The restaurant was absolutely heaving this evening, with the staff rushed off their feet, so I can understand the waits with the drinks and the slow pace of food coming out. It's not something we were bothered by.

But I absolutely cannot forgive what happened with being told there wasn't a Calamari wrap on the menu, when there clearly was.  Even after the £50 voucher was taken off we still had a further £28.70 to pay, so I'm unhappy to have had to pay for the fries, and the higher price for the salad  - but I suppose this is my own fault for not being more forceful and demanding to see the menu again myself.

When I arrived home and saw there was a calamari wrap it's soured the meal somewhat for me, even after ending the evening with a lovely big sundae.

However, seeing the boys looking at my scan picture together and trying to decide if the baby will be a boy or girl while we waited for the food brought a tear to my eye, so the evening hasn't been a complete disaster. 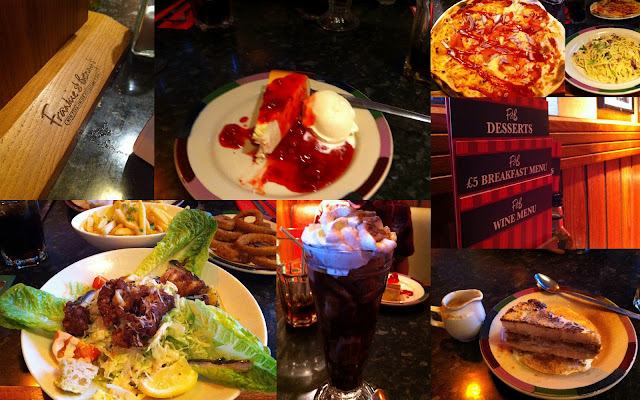