I love communicating on Twitter.  I've made friends, found out about and attending some excellent events and learnt a whole host of things I never otherwise would have done from there.

I especially like chatting with other people about food.  Previous conversations about nostalgic food, strange combinations and simply what people are having for their lunch/tea have led to cooking inspiration.  But two conversations this past couple of days have made an impression.

The first was a chat with Ewan about doing an Olympic food event - I was thinking about trying to bake things from as many countries as possible, but when he came up with the idea of at least 11 of us being allocated countries to do a dish from each night then I had to join in - if you fancy taking part too then leave a comment on his blog post http://tonights-menu.blogspot.co.uk/p/2012-london-olympic-dinners.html (also he has a lovely blog that could do with some more followers, so hit that follow button too!).

The other conversation that my ears pricked up to was from Rachel and Elizabeth's (CDWR guest bloggers) breakfast - potato waffles! As soon as I saw their tweets I had to have some, Phil was despatched to the supermarket this afternoon and for tea tonight he whipped up a veritable feast. 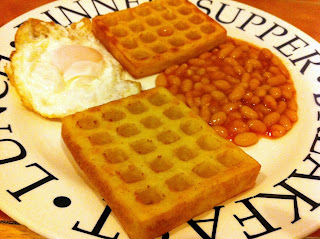