This is a lovely guest post written by the marvellous @beccymorby.

Well, when I saw that Rachel was looking for a guest blog for her “wine of the week” slot I must admit it seemed a little intimidating. Sommelier I am NOT! However, I do like my wine and if the decision to allow someone to blog was based on the frequency and quantity of consumption then I was definitely the woman for the job.
Interestingly, whilst I was thinking what I wanted to write about and was reading Rachel’s blog I noticed that she had said she despises Chardonnay. SNAP I would have said a few years ago. In fact my only stipulation for a wine order in a bar used to be ‘large and ABC’ – Anything But Chardonnay! Then on a holiday to the States a few years ago I went on a wine tour day of the Napa Valley (a beautiful place and if you ever have the opportunity to go I can’t recommend it highly enough)…anyway I digress. Whilst at one of the vineyards the wine maker explained the process of oaking wine (I’m sure this isn’t the technical term but it’s what I took away!). I then tried a Chardonnay which had been oaked and one that was unoaked – a revelation! Although I do think that to the more educated palate you were supposed to prefer the oaked, I thought the unoaked one was delicious. I remember it being one of the nicest wines I had ever tasted. Perhaps the memory is enhanced by the beautiful surroundings and the slight alcohol haze but it was delicious and needless to say I then paid through the nose for two bottles which I promptly guzzled as I returned to my hostel that evening - classy!
So just for Rachel and as a bit of a blast from the past for me, I thought I might try and locate a reasonably priced, quaffable and most definitely unoaked chardonnay. To see if I could tempt any other ABC drinkers to give it a try off I trotted to Rhythm and Booze on the Main St. I found one I thought looked quite nice, noted to be ‘unwooded’. (Oops, perhaps that’s what I meant all along.) It was a Yalumba Unwooded Chardonnay (2010) from South Australia and at £8.25 a bottle it certainly didn’t enter to cheap bottle category, but for a Friday night in I don’t think that was too bad.
It turned out to be really quite drinkable. Although I can now see why perhaps some people prefer not to drink Chardonnay as whilst I enjoyed drinking it, it wasn’t the most refreshing drink and was markedly improved when I was drinking it with dinner (ham gratin with chard, asparagus and jersey royals in case you asked!). It is dry with fruity elements but not as crisp as other types of white wine I tend to drink usually. So whilst I would buy another bottle it would only be to drink with a meal and if I wanted something chilled and refreshing to sit outside and enjoy the weather I would probably revert to type to a Sauvignon Blanc or a Dry Riesling. It was definitely worth a try and if you fancy something a bit different tonight you won’t go far wrong with a bottle of this. Plus – an additional nice marketing touch - part of the label peels off so that you can remember the name of the wine and the producer for future reference!
I’d be really interested to hear what others think of this wine and if it would tempt them away from their usual tipple!?
Beccy
PS. HID doesn’t do white wine so decided to get a bottle of the Yalumba Cabernet Sauvignon (2008) from South Australia instead – he reckons it was tasty and full bodied although I think the highest recommendation was that he had polished the bottle off by the end of the evening! 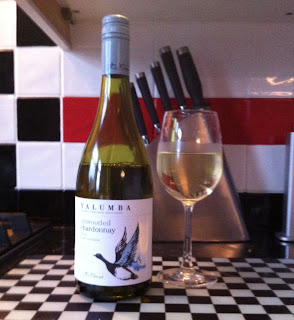 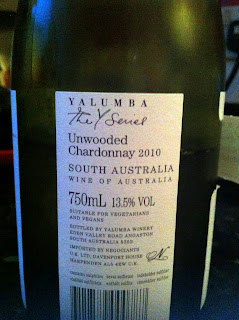 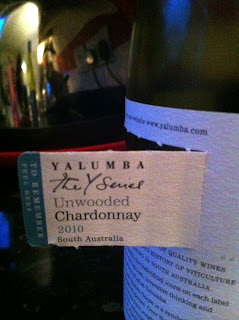 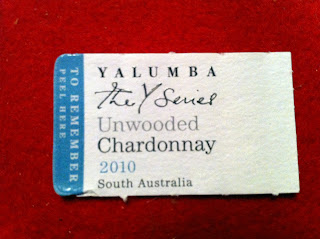 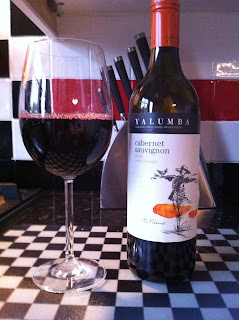 Massive thanks to Beccy for this - I may be tempted to give Chardonnay a go after reading this - I hooted when I saw the ABC comment - I remember reading it in a book and thinking that's so like me, Anything But Chardonnay!  I absolutely love the little peel off sticker too!