I used this recipe from Jane Hornby as the basis for my cake, but as usual added my own twist to the recipe.

For the cake:
250g Self Raising Flour
250g stork marg
300g soft brown sugar
1 tsp vanilla extract
3 eggs (one large and 2 medium, because I had 1 large to use up!)
50g cocoa
Half a pack of 70% chocolate, chopped up
3 tsp instant coffee, with small amount of boiling water

I followed Jane's method of melting the butter then adding that to the sugar, eggs and vanilla after it had cooled for 5 mins.  I then added 200g of the flour.  In order to be able to make my cake 'choccamocca' I decided to do 2 mixtures and then marble it in the tray.  I split half the mixture to another bowl and to that one added the dissolved coffee - I added the extra flour to this to firm up the mixture.  In the original bowl I added the cocoa and the chopped chocolate.

I made the mistake of splodging all the chocolate mixture into the greased tray first, then adding the coffee mixture to that.  As you can see from the pics I ended up with all chocolate at the bottom and coffee at the top - next time I do this I'll do it a splodge a time of each.   When all the mixture was in the tray I used a knife to attempt some marbelling.

I baked this in our (not very good) oven for 35 mins, as indicated by Jane's recipe, but then added another 10 mins.

When the cake was cooked I took it out to cool and made another schoolgirl error - I turned it out of the tray.  I don't know why I did this, every other time I've made a tray bake I've always, always left it in the tray and then decorated.  As I turned it out disaster struck and it started to crack!  I enlisted Phil's help and we turned it back over - it fell apart!  Argh! I decided to patch it up with the icing so whipped up basic buttercream to my usual 50g stork to 100g icing sugar, then added cocoa powder and a cap of tia maria (if I wasn't pregnant I'd have been a bit more liberal with the Tia Maria) the icing was a bit too dry so I added a splash of milk to loosen.  I then spread that over the cake and went wild with sprinkles, hoping they'd disguise the cracks!

The cake tastes great, cracks and all, and I have learnt not to turn the cake out of a disposable baking tray!! 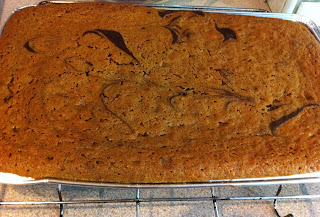 The top - you can see a wee bit of swirling 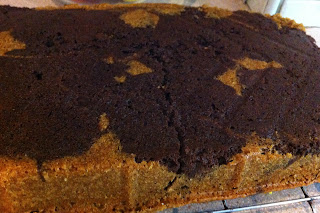 The underneath - all the chocolate splodges and a bloody great crack!