I love Indian food, and especially love it without meat, so I decided to make a dal, also wanting a nice cheap recipe and one that wouldn't call for vegetables that only I like to eat.  I used this BBC Food recipe for Tarka Dal, but used dried chilli rather than fresh green ones, having forgot to buy them at the supermarket.

Boy was that a mistake... I put too much chilli in and ended up making this inedible for me.  So, so hot!

I liked the texture, and the flavour of this dish though, so I would make it again.  But I'd use less chilli and make sure I have some yoghurt/creme fraiche in to calm it down so I can eat it.

I have some yellow split peas left to use up - thinking of putting them in a soup, anyone else used them for soup before? 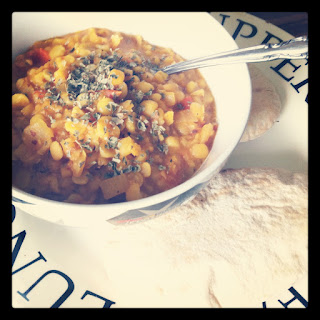