When I was contacted by Hello Fresh with the offer of a 3 meal box I happily accepted the invitation and chose a vegetarian box, being a bit fussy about meat and not really enjoying it that much while pregnant, then promptly forgot all about it.   I merrily planned all my meals for this week only to get a phone call on Tuesday from a friendly delivery man checking my address and the realisation I was getting the box this week dawning.  Luckily everything I planned can be used into next week, so nothing has been wasted.

We arrived home and I ripped the box open like a child at Christmas. 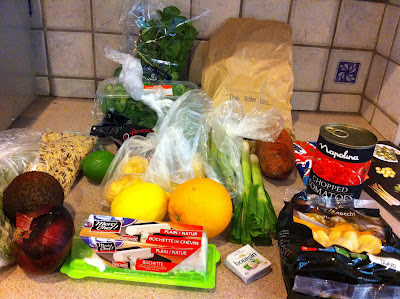 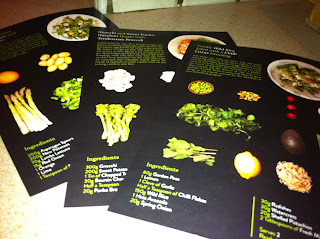 And there it was, a box full of healthy goodies and three recipe cards for how to make the meals.  Things I wouldn't normally think to make.

On Tuesday we opted for the Gnocchi and Sweet Potato Gratin with Tenderstem Broccoli. 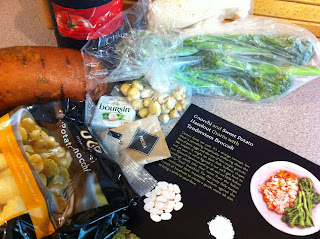 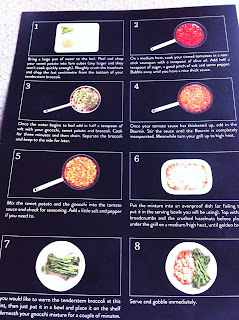 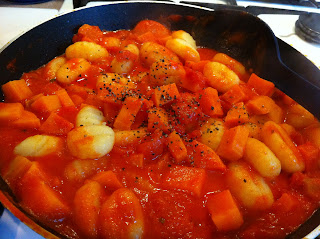 I followed the recipe card with ease, deciding to leave out the hazelnuts, not being a big nut fan.  I hadn't had Gnocchi in ages so was looking forward to trying it with Phil, who'd never had it. 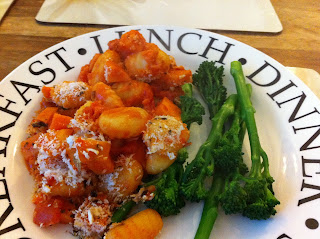 The result - on the table within 25 minutes and delicious.  We'll definitely be trying this recipe again.

On Thursday we had the Wild Rice Salad with Citrus and Chilli dressing.  Phil cooked this one and we decided we wanted some potatoes with it so he made the Pommes de terre a l'ail from the French cookery book I received in the Retro Cookbook swap I participated in. 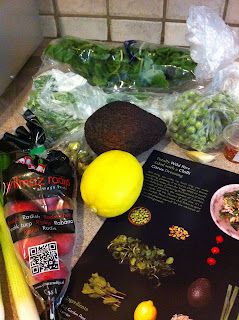 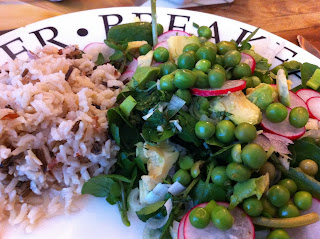 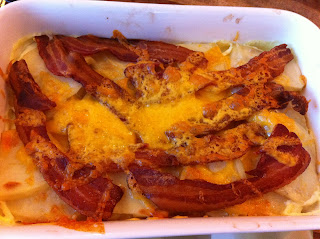 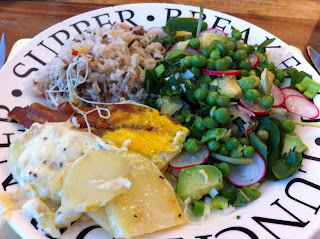 Phil found following the recipe easy, although he had the added difficulty of making another dish alongside it. I really enjoyed this meal, especially the avocado.  It was probably a touch too garlicky though.  The potatoes were gorgeous, I'd definitely have those again.  There was plenty of leftover rice so I was able to take that to work on Friday.

On Friday it was my turn to cook, we had the Citrus Salad with Asparagus and Goats Cheese, and Phil had a pork chop to go with his. 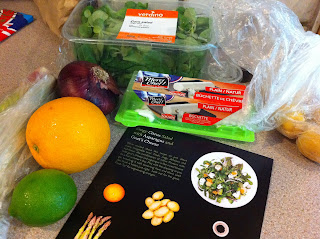 I really liked the dressing for this salad, but chose to leave out the onion, Phil hates onion so inflicting raw onion on him is far too harsh.  I only had a tiny bit of the goats cheese, it being one of the cheeses I'm meant to avoid while pregnant, so Phil's plate was a lot more cheese filled than mine.  I also sliced my potatoes before cooking rather than do it after. 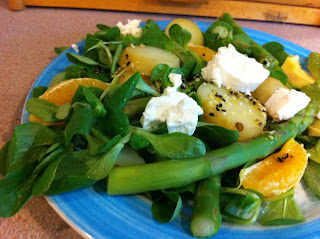 Yet another quick and delicious meal.  I wouldn't normally put orange in my salad but enjoyed having it with the orange segments in.


I like the concept of Hello Fresh, taking the hassle out of meal planning and food shopping but still giving the enjoyment of cooking something healthy and nutritious.  But it's not something that we'll be signing up to.

Whilst there is the option of a box coming every other week it's priced just out of my food budget and the meals aren't ones the whole family will eat (healthy meals and teenage boys don't always mix well).

If there was the option of a one off box then I'd definitely consider that, especially on a week when I know we'll be busy and a delivery like this one would be a godsend.  I also think Hello Fresh are missing a trick by only having these for 2, 4 or 6 people - what about single people?  The fact that the ingredients come in the quantities needed would really appeal for single people, having been there myself and found it frustrating to not be able to buy small enough amounts for just one I think this scheme might have been one I would have considered.

All in all I think it's a great idea, and I can imagine it really working for busy London type professionals.  I wish Hello Fresh success with their business, and would like to say a big thank you for being able to try a box.
Posted by Unknown at 17:39