I got an email a couple of weeks ago asking if I'd be interested in reviewing a Domino's pizza.  Being pretty poor, and a pizza fan I took up the offer.

I was promptly sent my voucher and decided to use it as a Friday night treat for me and Rich - having gone and done a work out at the gym straight from work I didn't feel too guilty for pizza for tea, and for the 2 large glasses of wine I had with it....

We went up to my local Domino's in Headingley, this is the first time I've actually gone to collect a pizza from Domino's, I've always done online ordering and had them delivered in the past.

I didn't need to look at the pizza menu I always go for Pepperoni Passion, but Rich stumped me by asking what base I wanted - I never usually bother changing bases and just have the classic one.  We asked to have the thin and crispy base, which appeared to cause some confusion over what that particular base meant...we ordered from an assistant who'd only just started, and was rather....erm....excitable.  Not sure I would do a little dance behind the counter...  I was also mortified that after I ordered a large, 10 slice pizza he then looked at Rich and asked what he wanted!  I know I'm a big lass, but I couldn't eat a ten slice pizza to myself... Well, OK, I probably could, but still - he could have asked if we required anything else, not assume we were a pair of greedy gerties... (To clarify, we were sharing the large pizza!).

We didn't have long to wait before our pizza was ready, and picked up some beers and vino on the way home.  I was famished by the time we got back and quickly tucked into some pizza. 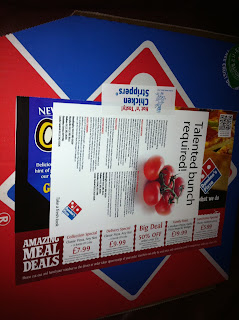 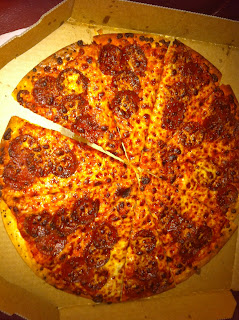 I don't know if it was the different base, or the fact we collected it, so got the pizza "fresh", but I found it to be much tastier than when I've ordered online.  Previously I've found Domino's to be a bit greasy, but this one definitely wasn't.  One of my pizza pet hates is for the slice to be floppy and limp (a la pizza express) but this one was just as I like, nice and crispy, with the topping not falling all over my face and top as I try and eat it... not that I ever do that of course, that's never happened to me before....

I'll certainly go and collect a pizza from Domino's over order them, and I'll be opting for a thin and crispy base.
Posted by Unknown at 20:07