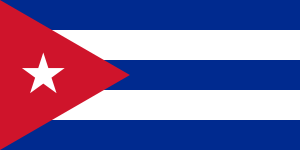 After Thursday's disaster I couldn't ruin another dish... For Cuba I picked a dessert, particularly because I think it'll be easier to get the whole family to try a dessert rather than to have to make two meals each night (which I'm doing tonight...).  Everyone likes rice pudding so I thought I'd be onto a winner with this one.

I found an excellent cuban food website and picked up the Arroz con Leche recipe from there.

I followed the recipe, but used one of the notes at the bottom, we had 3/4 tin of evaporated milk in the fridge that needed using up, so I used that and increased the volume of water cooking the rice to dilute it a bit.  I also reduced the amount of sugar used.  I might have also misread the bit where it said garnish with ground cinnamon, and I cooked it into mine... Oops!

(Not the best picture, sorry, but it was 8pm and I had 3 boys demanding pudding to feed!)

I'd really like to do a Cuban themed dinner party in the future, particularly to do this roasted leg of pork!