I was offered tickets for the Jubilee Spitfire Proms event but asked my good friend Fiona if she'd like to go on my behalf and do a little guest post for me.   Fiona lives in Harrogate and has recently taken the brave steps of setting up her own business - Re-New Therapies.  If you need pampering she's your gal. 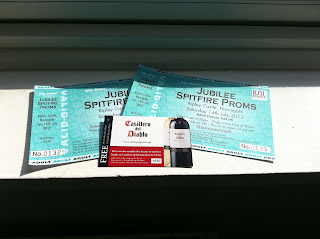 There were some worries as previous concerts had been rained off but fortunately all was fine on the night…the sun was shining and the turn out was good…unfortunately my pictures here don’t show how busy it was! Some photos later on give a better idea of the numbers! 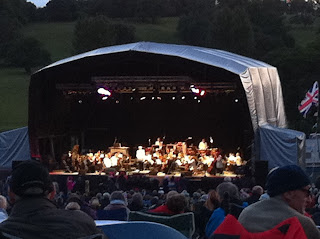 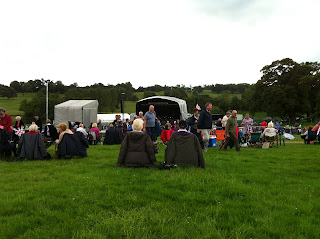 Then the warm up music started as the spitfire plane arrived and did a 10 minute aerobatics performance to ‘On my lips every kiss is like wine’ and ‘Light Cavalry – Overture’ …I probably missed something else whist watching the performance!!!

Then the warm up music started as the spitfire plane arrived and did a 10 minute aerobatics performance to ‘On my lips every kiss is like wine’ and ‘Light Cavalry – Overture’ …I probably missed something else whist watching the performance!!!

We headed first of all to the Casillero de Diablo tent for our bottle of wine, Casillero is the most famous Chillian wine company so I was looking forward to trying it out. We decided to go for a red wine…now I’m usually a Merlot girl and not so keen on a Shiraz…I like a thick, velvet texture…these are the choices we had:

Carmenere
Fruity and slightly spicy, this was the recommended wine and my favourite, it’s not my normal choice of wine as I like thick, full bodied wine, this was lighter but I definitely enjoyed it. It went extremely well with our picnic of tortilla chips, pork pie, ham and pickle sandwiches and Maple and Pecan fudge.

Cabernet Sauvignon
I wasn’t sure at first sip so went back for more…this was mum’s favourite and I liked it but not as much as the Carmenere or the Caberet Sauvignon Syrah.

Shiraz – We didn’t taste this one.

There was also a premium red…

What the guy said…(ok so I googled it after as he spoke quite fast) Casillero del Diablo Reserva Privada is an assemblage elaborated mainly from Cabernet Sauvignon grapes selected from Pirque vineyards, place of origin of Casillero del Diablo in the Maipo Valley, and a contribution of Syrah grapes.

This was selling for £12.00, we tasted this one after tasting the Cabernet Saivignon, I preferred this one but didn’t notice a big difference, it was just a little smoother and had a richer taste, mum preferred the first one. Both of us preferred the Carmenere. 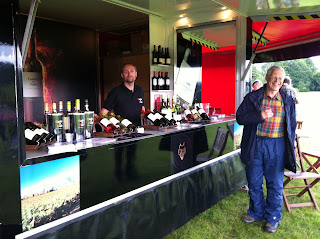 We also filled in the competition form to win a 3lt bottle of Brut Reserva…the winner was announced halfway through…it wasn't us.

Once armed with our wine we went to find a good spot, we found a lovely are and set our chairs…purchased from Argos that afternoon…up and organised our food and wine so they were easy to access. The atmosphere was great, a lovely couple were perched on a little hill like the King and Queen of Ripley Castle, surrounded by union jack flags…I was a little jealous as they had a perfect spot!!!

The first guy to make an announcement had obviously not done his research…he came on stage and announced the Casillero del Diablio competition and started going on about how he was going to attempt to speak Italian…several people commented that they thought the wine was Chilean not Italian…a little embarrassing to say the least. Especially as at halftime he had to come back on stage and apologise for saying it was an Italian brand!!!

Next came the announcement that the fireworks would not be arriving…apparently they were in a broken down lorry on the M1 and the AA couldn’t fix it. The audience were not very receptive to this news…poor guy tried to make a joke about using umbrella’s to shelter from the sun…must have been trying to lighten the mood but it went down like a lead balloon!!! I was really looking forward to the fireworks so this wasn’t the best news but at least the whole thing wasn’t rained off!!! 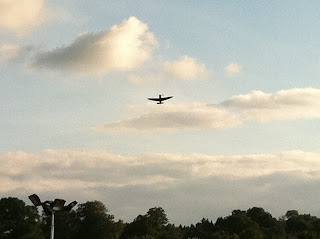 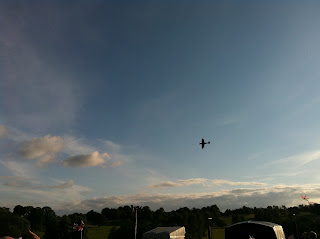 Sorry I couldn’t get any clearer photos!!!

Here are some other songs that followed…

These other well known ones also followed…’I could have danced all night’ ‘The Great Escape theme tune’, ‘Star wars Theme Tune’ ’Rule Britania’ ‘Land of Hope and Glory’.

The only major disappointment from the evening was that the fireworks had been cancelled, it was a great atmosphere with adults and children alike joining in the celebrations, singing and dancing.