If you follow me on Twitter, or are friends with me on Facebook, then you'll know all about my terrible time trying to make Daisy's Christening Cake.  I could have easily bought one, or asked my Aunty Julie if she'd make us one (she does fantastic celebration cakes), but this was something I wanted to do for Daisy myself.

My finished article looks very homemade - but it was homemade, and I am no professional cake baker.  I'm absolutely rubbish at decorating, but I enjoy the baking process.  Usually.  However baking a 14" cake was something I was very, very, very unprepared for.

When I bought the tin I was convinced that the book I'd bought specially on celebration cakes had a recipe for a 14" cake.

I consulted the internet, asked Twitter, and was given a whole menagerie of advice on what to do.  I looked at The Pink Whisk's guide to upscaling recipes.  There is a recipe on there, but via twitter a lot of the advice was to weigh eggs and go with equal amounts of butter, caster sugar and flour.  That's exactly my usual method of baking - I use the Bero book 4,4,4,2 recipe as a basis for all my cakes.  (4oz butter, sugar, flour, 2 eggs weighing 4oz).

My first attempt was not successful.  I used far too much baking powder, and the cake rose and sunk, and then cooked too quickly - but then turned out to not be cooked at all in the middle. 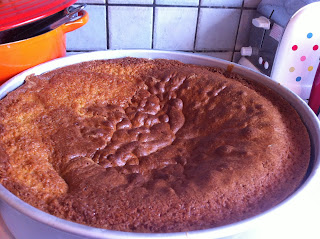 I was given some fantastic advice by Aunty Julie, and my second attempt was a roaring success.

Method
Oven on to 160, grease and line the tin.

As advised I made up the mixture in 2 batches, so batch 1 was 450g, 2 and quarter tsp baking powder, 7 eggs, 1.5 tsp vanilla extract, made up in the usual way. (Cream butter and sugar, add eggs 1 at a time with a bit of flour with each, then add the baking powder and vanilla).

I poured the first batch into the tin, then made up the second and poured that on top.

I used Renshaw fondant icing, with a little sprinkle of Tilo in to make it more pliable.  After I'd rolled out the fondant I used two different indented mini rolling pins to add the flower prints to the icing - we bought these at the Cake and Bake show, I know I'll get loads of use out of them, I love them.  I cut out the fondant butterflies and flowers a couple of days prior to baking, so they had time to dry out.  I also freehand cut out the DAISY letters - that was very, very hard to do - the stencils I bought at the Cake and Bake show were too small for the size of this cake though.

Phil's sister Mel kindly helped me with covering the cake (and also lent me edible glue, Tilo, and other tools).  We used a hell of a lot of butter cream and covered the cake, I had been advised to do 2 coatings, but our fridge isn't big enough for the cake to go in to set, so we just did the one.  It needed a hell of a lot of buttercream - I think we used 500g icing sugar and 250g stork.  Then we rolled out the white fondant to cover it.  I bought a 2.5kg pack of white icing, which was more than enough to cover the cake.

It took 3 of us to roll it out, then pick it up and cover the cake with it.  We then smoothed it down, and added a ribbon around the base.

The next day I glued the flowers and letters on.  The butterflies seemed to clutter the cake up too much so I left those off.

I wasn't happy with the lettering, but I knew that was the best I could do with it.  The spacing wasn't brilliant and it ended up being a bit cockeyed when I glued everything on, but I was proud of the final cake.

There's absolutely no way I could be a professional cake baker, the stress would finish me off - but now I know I can do a 14" cake (with help!).

I was sent some Ryvita Thins to try by The Work Perk.

I like normal Ryvitas, especially with cream cheese on, but I'd not got round to trying the thins yet.

These Sweet Chilli ones were OK but I couldn't eat many of them - and they really didn't taste nice with mango chutney - that is not a taste sensation I will be repeating.  I did enjoy them with the hummous though.

In terms of dipping vessels I would never pick these over breadsticks, because what can be better than breadsticks for dipping?  Good with sour cream and chive, and even better dipped in chocolate spread.

If I saw the Cheddar and Cracked Black Pepper Ryvita Thins on offer then I'd try them, but I can't honestly say this is a product I'd pay full price for.
Posted by Unknown at 07:27 1 comment:

I find York quite hard to grab a quick coffee with Missy, everywhere is so busy, or small and pokey (sorry - quaint) so it's not really an appropriate place to go to with a baby.  The one and only time I took the pram to York I ended up grabbing a coffee in BHS cafe (coffee - bad, space - good, service - friendly, baby changing - dated, could do with the bins emptying more often, but clean).

I've been to the bar/restaurant in City Screen a few times to meet a friend.  It's a great location, busy without being too busy to get a seat and most importantly - spacious.  I don't take my pram to York (can't get on the bus there with the pram), but the friend I meet takes hers so meeting somewhere with space is essential.

Staff are polite and helpful, it wasn't a problem to get some hot water to warm Missy's bottle up.

It's a slight pain to have to go to a different floor for baby changing - and also get the key from the staff - but the plus to that is the facilities are nice and clean.  It's no big deal to not have them directly to hand. Space - Excellent, plenty of room for a pram

Price - not too bad for York, just under a fiver for coffee and a piece of cake
Baby changing - clean, but not on the same floor as the cafe
Help - very helpful, no problem providing hot water
Coffee - nice cup of coffee, not the best I've had, by no means the worst
Cake - alas the piece I had was slightly dry, but I wouldn't let that put me off trying more

I'd love to pop in on a night, the bar/restaurant is licensed and there is a nice view of the river.
Posted by Unknown at 11:12 3 comments:

I was sent two bags of Penn State Pretzels to review. 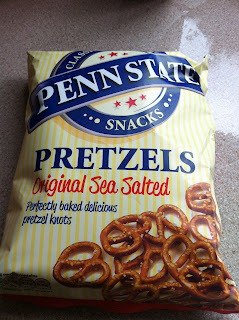 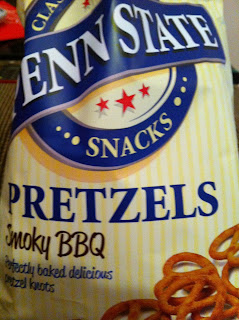 We ate the Smoky BBQ on their own, but used the original sea salted in the recipe sent to me to try.

Method:
Melt the chocolate gently over a pan.
Add the cream little by little.
Fold in the egg yolks until the mixture looks glossy.
Break up the pretzels using your hand – Sea Salted work best as a contrast to the sweet chocolate.
Add the mixture together.
Spoon or pour the mixture into separate cups or ramekins and leave to chill.
Serve with raspberries on top and enjoy with friends. 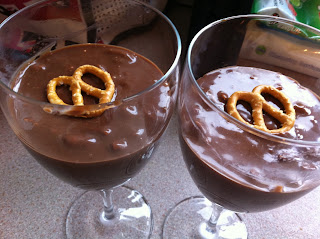 The chocolate pots are very, very rich - so I wouldn't recommend being a fat pig and serving these between two - they could have served six easily.  I ate mine and spent the rest of the evening regretting being so greedy.

I liked the salty addition to the chocolate pots, but I knew I would because I absolutely love salted caramel.

I don't think I ground them down enough though because Phil thought the texture was a bit like eating soggy crisps, so I would recommend a heartier bashing of the pretzels than I managed.