In honour of it being Chocolate Week last week I wanted to bake a chocolate cake.  I'd fully intended doing a chocolate victoria sponge, using a recipe from my Good Housekeeping Baking book.  As I made the sponge I realised I didn't fancy chocolate icing (I was feeling a bit sickly after sampling a little too much of the mixture...).  After enquiring who does and doesn't like cherries in the house I decided to go with a ginger icing instead.

I won't post the recipe for the sponge, as it isn't mine to share.  For the icing I used 75g butter, 150g icing sugar, chopped stem ginger and some of the sugar syrup my stem ginger had been in.  I made up the buttercream icing as normal, adding the sugar syrup, then divided the mix into two.  I then added stem ginger to the half I was using to sandwich the cake, but kept the top layer of icing without the ginger pieces.  For a little bit of extra decoration I added the little gingerbread men. 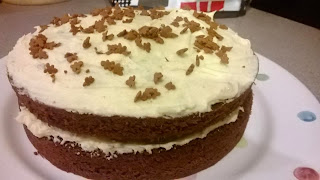