I was approached by the PR company of Hammerson, the developer of Victoria Gate in Leeds, to take part in a challenge to promote the importance of food banks and healthy eating - a project that Hammerson have funded. Zest Health for Life created a recipe book to give simple, healthy recipes and tips on eating healthily, the Hammerson project has paid for these books to be reprinted.  These books are being distributed by Leeds East Food Banks.

I was sent a parcel with the ingredients for Falafels, one of the recipes from the book.  Bread, garlic, chickpeas, ground cumin, baking powder and a lemon.  I was also sent a packet of pasta to go with the dish - but who on earth has pasta with falafels?  Surely couscous is better, and so cheap - but perhaps not as widely donated, or trusted to use?  I used a packet of flavoured couscous that's been in my store cupboard for far too long, and also served with a dollop of hummus.  The other half of the lemon could have been used to flavour some plain couscous though.

Following the recipe was very easy, although I was lucky we have a food processor that I could use to blend the ingredients - mashing them wasn't very appealing.  I thought they tasted good, although sadly my husband is not a falafel fan and labelled them "FalAwfuls", thanks for that!  The recipe called for two full cloves of garlic - I thought that was way too much to add, so I just used one, and the garlic was still very strong.

Am I convinced that the clients of the food bank would make these falafels - not really, it was faffy and time consuming to do - but I fully admit to being completely naive about who those clients are, perhaps I'm totally wrong and plenty do make them?

The only revisions I'd make to this recipe is to use bottled lemon juice, and garlic puree - which might possibly be one of the things given out?  It's certainly useful to have in the store cupboard.  To me these would be cheaper alternatives.

So, the rest of the book.

I like the way the book was written, I like the information on cooking terms, I like the budgeting tips - particularly going to Leeds Market.  Recipe wise I liked the Sausage Casserole recipe, and the basic tomato sauce recipe.  I loved the fruit and vegetable seasons page - so much so I'm going to stick it on my fridge.

I didn't like the number of ingredients in each recipe - take the leek and potato soup for example, their recipe has 9 ingredients - mine has 4 - and that includes using fry lite!   Flicking through the book I'm sceptical that some of the recipes would be used - but I tried to sit and think of what I'd replace them with - and other than a lot more pasta dishes and various soups I don't think I could come up with anything better.

I was going to write about my thoughts on how food banks should operate etc - but I'm not sure I'm qualified to do so, I've never been in one.  My assumptions are based on what I've seen in the news and read in articles.  I'm assuming the people using them aren't all that dissimilar to my family, and although I often order falafels when eating out, it's not something I'd ever thought to make for my family.

After I made my recipe I'm left with half a lemon, the pasta, some garlic and the rest of the jars of baking powder and ground cumin.  I've also got the full loaf of bread in my freezer for emergencies, I had a loaf that needed using that I pinched two slices from.  I'm going to buy another tin of chickpeas, find some oil in my cupboards and then use the garlic, the remaining half lemon and ground cumin to make some hummus, which my girls would happily eat vats of!

Doing this, and flicking through the book, has brought Food Banks back into my mind.  I'll definitely look out for one of the drop off points for one next time I'm at the supermarket, and pop a few tins in - and a packet of plain couscous.

My twelve weeks on Move it to lose it

I've just completed 12 weeks on a 'lifestyle improvement programme'.  It gave me free membership and weekly weigh ins at Slimming World and free gym membership for the 12 weeks.

Unfortunately I haven't done this during an easy 12 weeks of life.  Right in the first month we went on honeymoon - where there was no way I was going to stress myself out trying to food optimise in Rome, then at least 5 out of the 12 weeks we've existed on an average of 3 hours broken sleep a night, because of teething, sickness, snoring....

I suppose, having already been doing Slimming World for what seems like an eternity, there was no way I was going to get those great weight losses you do in the first few weeks.  But I fully expected to lose around 2Ibs a week, food optimising and going to the gym.

But I didn't.  I yoyo-ed, up and down, and up and down, and up and down.  My consultant told me I didn't lose a decent amount of weight because I didn't stop to group all the time.  I did stop to at least 8 out of the 12 sessions though - and looking back my weight losses weren't any better the week after I'd stayed to group.  I make no secret of the fact that I don't enjoy the group part of the session - if I'm completely honest I find it utterly tedious.  It felt like an hour and a half waste of my life every week.

So at the end of the 12 weeks I've made the decision I won't return to Slimming World.  I will follow the plan at home though, over the year I've found quite a few 'Slimming World' meals that we will all eat - I don't find eating as a family as stressful now.  My only problem is not having easy access to scales.  We don't have any in the house - it's all too easy to become obsessed with hopping on and off them.  My nearest Boots is either Leeds or York, and I don't go weekly to either.  I'm telling myself that I'll weigh monthly, so we'll see how I get on with that.  I suspect not weighing every week my motivation will drop off.

So the going to the Slimming World classes side of the scheme - not so good.

HOWEVER, the going to the gym element I have absolutely loved.  I look forward to going, especially on a Saturday or Sunday morning.  Having somewhere to go to get out of the house a few times a week and be on my own, or with a friend - has been wonderful for my mental health - particularly during the non-sleeping weeks.  My confidence is slowly building in there, and I'm even running on the treadmill now, and not caring if other people are there to see.  From what I've gathered so far, nobody pays the blindest bit of attention to what anyone else is doing.  Well, apart from me when I'm trying to listen to someone else's conversation that sounds interesting.

Going to the gym has given me a new found happiness, and best of all - that's where the results of the 12 weeks can be seen.

The scales show I've only lost 6Ib in 12 weeks (pitiful) but the tape measure shows much more positive results.

I'm going to sign up to be a member, and I'm even going to try out a few classes - I felt too fat and unfit to go to any before, but I'm going to give a couple a try and hopefully will be OK.  Perhaps not spinning just yet though, the memory of that hell is all too real still.... 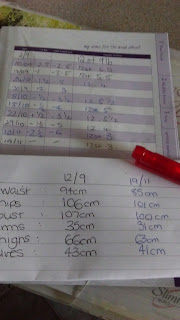 Although the gym side of things has pleased me, I will admit to feeling like I've failed on the losing weight side.  I desperately want to break into that next stone barrier - so I've just got to keep trying.  And stop eating malteasers...
Posted by Unknown at 20:37 1 comment:

Email ThisBlogThis!Share to TwitterShare to FacebookShare to Pinterest
Labels: fitness, gym, health, life, move it to lose it, Slimming World

I've adapted this from a recipe in the Slimming World Extra Easy all in one book.  My version strips the recipe back to basics, making the flavour a bit more palatable for the young children.

Bring to the boil, then reduce the heat to low, put a lid on and leave to simmer for 15 mins.

Turn the heat off after 15 mins but leave the pan, with the lid still on, for another 15 mins to absorb all the liquid.

Serve after the 15 mins standing time.

Email ThisBlogThis!Share to TwitterShare to FacebookShare to Pinterest
Labels: one pot, Pork, tuna

I've been concentrating on my Slimming World (not that it's showing on the scales, but that's another post) and haven't eaten out all that much - we can't afford to do so anyway.  I'm not finding it as much of a challenge to find meals we'll all eat this time round.  Apologies for the poor quality of pictures, the camera on my phone is terrible indoors.

At the beginning of October I had a meal at Sonali - no photo, sorry - our local Indian restaurant. I had vegetable samosas to start - surprisingly spicy, and Lamb Multani - which came with melted cheese on top.  I've never had a curry before with melted cheese on top, but I really enjoyed it.  Sonali is very popular locally, I've always found the food to be good, and portion sizes generous.

I popped up to Newcastle to meet my friend and her little girl during half term - we ate at Prezzo, but sadly the food wasn't great, and the service was terrible.  I did think the children's menu was good value though; it's only saving grace.

Last week I went to the Homage2Fromage cheese cafe pop up in the Merrion Centre.  The Yorkshire Rarebit was fantastic - I'll go back just for that.  But my pizza wasn't quite as cheesy as I thought it would be - but still a decent pizza, and good value at £8.  It's an interesting concept and something different for Leeds.  And pulled pork burger free...  I would have liked to have had a slice of cheesecake for dessert, or even a piece of fruitcake with some Wenesleydale cheese - but maybe cheesecake is a bit too pedestrian.  The only criticism I have is the price of the cheeseboard, it seems overly expensive - but I didn't see one made up, so perhaps the extra items on the board make up the cost.  The staff coped very well with four children though, and were very gracious about the mess created.  I managed to get up as much as I could, but I really do need to take out a mini dustpan and brush for eating out with my girls!

When we arrived at the restaurant we were five minutes early for opening, and weren't allowed in, so we popped up to The Chilli Shop; I picked up a Really Nice Food Company sweet chilli dip, which is amazing.  There's lots of samples to try in the shop; I'll be heading back up there for something to add to my parents Christmas hamper I'm sure. 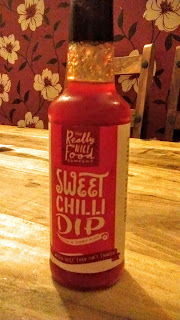